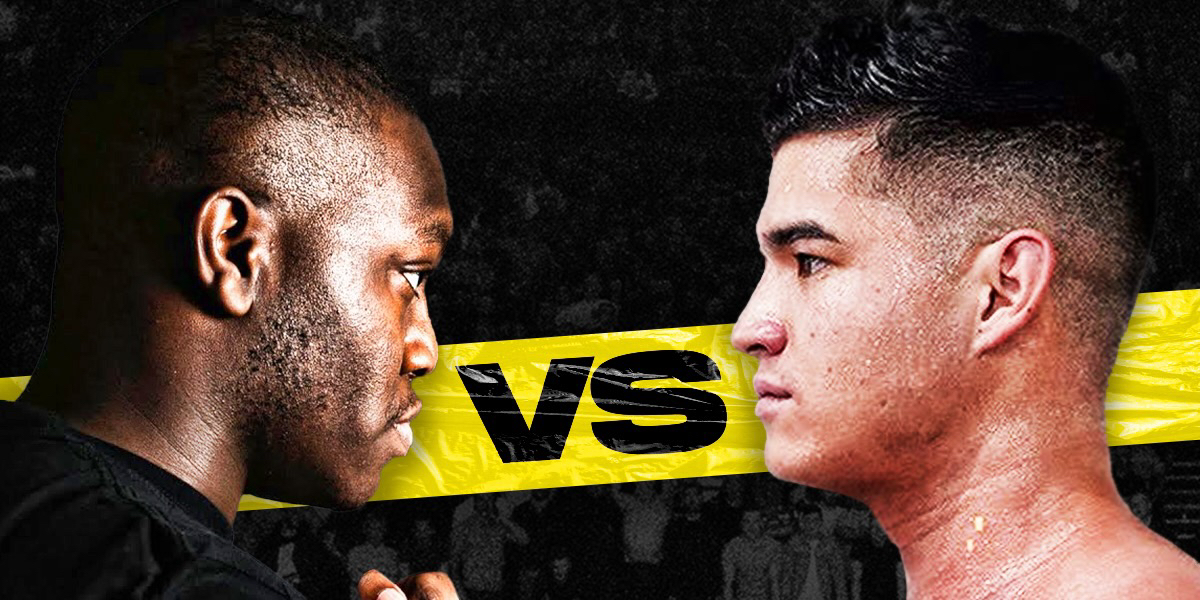 Across social media, fans have been a bit puzzled over Deji and Alex Wassabi’s beef. Especially with the new fight just being announced. As for some, it is the first time they are hearing about it. If you happen to fall into this category, don’t worry, we got you covered. The following article is a summarization of the pair’s beef. There is a whole lot to their feud, but here is everything you need to know.

The Origins: The First Fight.

To understand where the beef first began, we have to go all the way back to 2018. Back then, YouTube was a much different place. Jake Paul was still making children’s content, and YouTube boxing was in its infancy. In fact, the first YouTube boxing match took place that year. The first match took place in early February, featuring KSI and Joe Weller sparring it out.

Following KSI vs Joe Weller, many YouTubers wanted to get in on the boxing action. In fact, Deji was one of the first influencers to speak up on the matter back. Deji was very vocal about wanting to fight Jake Paul at the time. In early march plans for such a fight fell through. As a result, Deji posted a video saying the twos fight was off and that he was looking for an opponent. In this video, Deji mentions Alex Wassabi as a potential alternative opponent. This marked the beginning of the long-standing beef between the two creators.

Seeing Deji call him out, Wassabi decided to respond in a YouTube video. This was the moment when almost all the YouTube boxers turned against Wassabi. In this video, Wassabi attempted to expose Logan Paul, Jake Paul, and KSI for faking beef. According to Wassabi, these fighters were staging beef to promote their fights. Wassabi also went as far as suggesting that the contracts for Deji vs Jake Paul 2 were already signed. We now know that Wassabi’s suggestion is false. As there has been zero inclination for a rematch in the 3 years following his suggestion.

The Second Act: A Disappointing Loss.

In August of that same year, we saw KSI and Logan Paul face off for the first time. During this event, the YouTube community saw some major upsets. The largest was with Jake Paul’s defeat against Deji in the co-main event. Following this massive loss, Deji for a second time voiced his desire to fight Wassabi.

Flash forward to November of 2018. Deji looking to continue his boxing career, posted a video titled “My Next Fight…” where he asks his fans who he should fight next. In this video, a multitude of YouTubers interested Deji. Importantly, Deji for a third time voiced his desire for fighting Wassabi.

In September of 2018, Deji posted a YouTube video titled “we broke up…” where Deji reacted to various relationship break-up videos posted by YouTubers. One of the creators featured in this video happened to be Wassabi. As earlier that year, Wassabi publically broke up with fellow YouTuber LaurDIY.
Things got heated, as Wassabi was not too keen on the criticisms Deji shared in his video. Wassabi took to Twitter that same day to air out his opinion on Deji. In a now-deleted tweet, Wassabi blasted Deji for speaking on him and his girlfriend. Seemingly Inspired by Jake Paul’s win over Deji, Wassabi in his tweet promised to knock Deji out if he ever saw him. 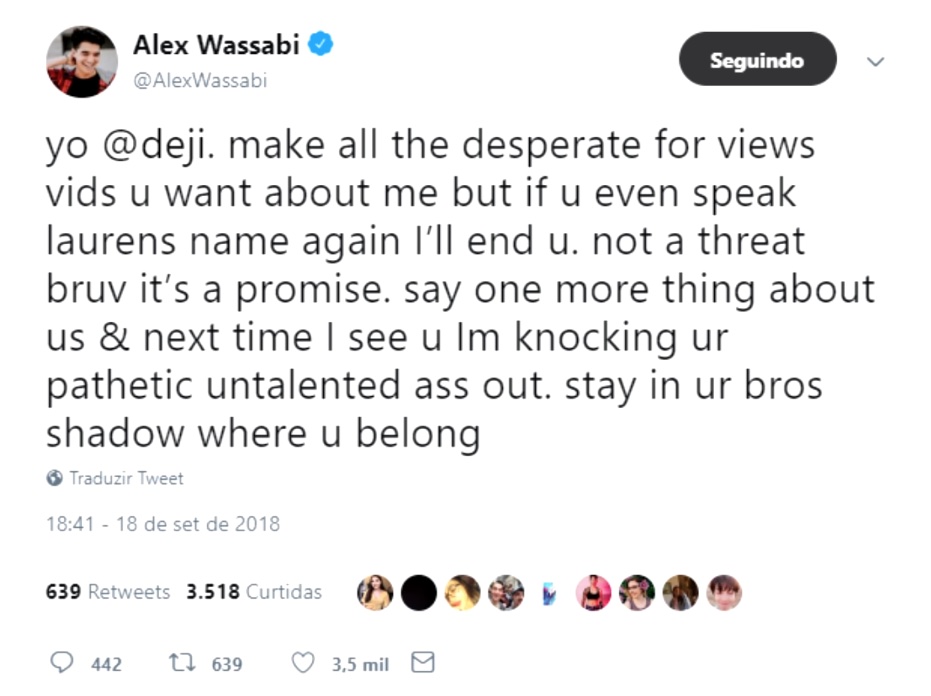 Alex Wassabi deleted-tweet regarding Deji, promising to knock him out if he sees him.

Deji responded to Wassabi by continuing to taunt the YouTuber. In a since-deleted tweet, Deji continued to edge Wassabi by mentioning Wassabi’s girlfriend. “Lauren is finally out to get some better dick haha” said Deji on Twitter. 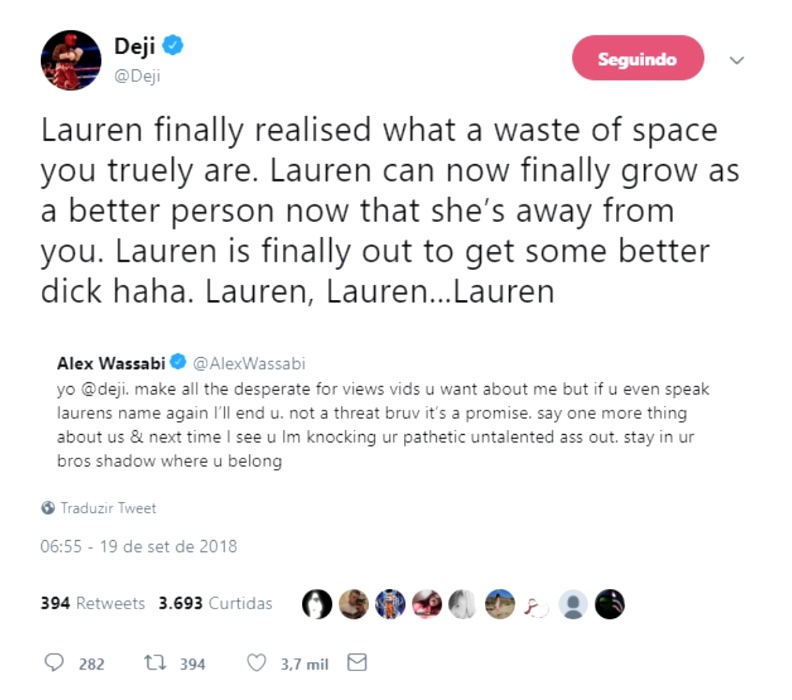 A few days following the two’s Twitter feud, Deji posted a video titled “this guy is going to kill me”. In this video, Deji mocks Wassabi over his knock-out threats. Deji also took the opportunity to challenge Wassabi to a boxing match.

“If we actually went to have a fight, I would actually make you my bitch.” – Deji, in his video.

At some point in 2018, Deji And Alex Wassabi privately sparred. Not much is known about this sparring match, but Miniminter and Randolph discuss it on the What’s Good Podcast.

The Fourth Act: The Road to Redemption.

On June 12th, 2021, the world was in complete shock over Deji’s loss to TikToker Vinnie Hacker in the Social Gloves: Battle of the Platform event. Many in the community felt that Deji took shortcuts in his training, and it showed in his poor fight performance.

As a reaction to his loss, Deji posted a video titled see you soon”. In this video, Deji announced that he was going to be taking time away from social media to focus on boxing.

“I needed [to lose]. This [has] somewhat humbled me.” – Deji, in response to losing against Hacker.

Shortly after posting, Deji disappeared. After a period of four months, footage of Deji’s training surfaced online. This footage generated mixed reactions among fight fans. At this time, Wassabi took the opportunity to crack a few shots at Deji. He shared on Instagram that after four months of training, Deji “looks the EXACT same”.

Eventually, Deji made an official return to YouTube when he posted a video titled “Redemption”. In this video, Deji sets high standards for his boxing return. He demonstrated in the video that he has been taking training seriously and is ready for redemption.

The Fifth Act: Looking for an Opponent.

Flash forward to November 11, 22, Alex Wassabi spoke on the possibility of fighting Deji on theSync podcast. “If I had to pick someone I wanna box, it’s Deji” he shared.

Following this, Deji uploaded a video titled “who am i fighting next”, where he reacted to rumors of his next fight. He again brought up the possibility of fighting Wassabi. In this video, Deji calls Wassabi a “waste man”.

Wassabi very quickly responded to Deji’s video. He posted on Twitter that someone needs to “humble” Deji. The following day, Wassabi posted a video teasing a potential fight between him and Deji.

Today, Deji announced that he is fighting with Alex Wassabi in a video titled “Ready for War”. They will be fighting in the Wembley Arena on Saturday, March 5th, 2022.

This is definitely not the end of the two’s beef, we are destined to see loads of beef leading up to their fight.

Edit (12/12/22): Updated the article to include information regarding Deji and Wassabi sparing in 2018. Corrected grammar mistake.