Early this morning, Ethan Klein, who’s best known for his YouTube channel H3H3 Productions, took to Twitter to share his stance on Joe Rogan. On Twitter, Klein accuses Rogan of causing vaccine hesitancy. Klein also took the opportunity to take a shot at Joe Rogan’s health. However, some Twitter users weren’t too fond of Klein’s views. 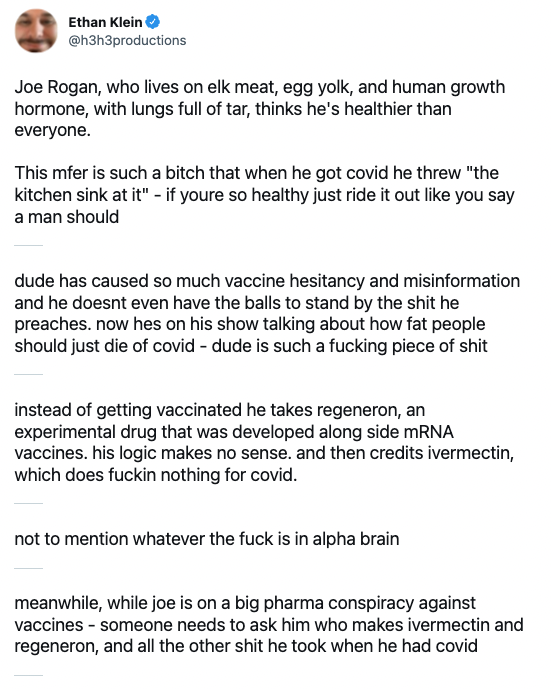 It is not entirely clear what exactly provoked Klein’s tweet, though one reason may be because Rogan has been sharing the importance of being healthy with his audience. For example, After Klein’s tweet, Rogan made the following Instagram post where he discusses the importance of being healthy. In this Instagram post, Rogan also shared a CNN headline that discussed the link between obesity and being more vulnerable to COVID-19.

Some Twitter users weren’t so fond of Klein’s views on Rogan, especially with regards to his health. In fact, many Twitter users took the opportunity to point out that Klein himself isn’t the most healthy.

Huge misrepresentation of @joerogan aside, Ethan Klein is in no position to lecture ANYONE on health or being a man https://t.co/Hb8wc4azEt

He's not wrong though, it's a wierd take to talk about how other people need to be healthier when he's taking every drug known to man to combat Covid, even when a lot of them aren't proven to even do anything against Covid, instead of just getting a free vaccine.

As a result of Klein’s tweets, many supporters and critics began clashing with each other. At one point during the Twitter spectacle, ‘Ethan Klein’ and ‘Rogan’  began trending.

Back in September of 2021, Ethan Klein aired similar criticism to Joe Rogan.

Keemstar, who has had a long-standing feud with Klein, shared his opinions on the matter.

Ethan Klein publicly begged Joe Rogan to do a podcast in 2017.

As of now, there are no updates to the story. To read more news about social media influencers, click here.