KSI got exposed by fans during the launch of his new sports drink company, and it’s kinda funny. Some are even taking the opportunity to clown the YouTube boxer. So, what happened? Well, fans busted out a measuring tape exposing the fact that the YouTuber isn’t actually 6 feet tall. I guess you can say, his fans left him a little bit ‘short’-handed in this situation.
In a now-viral TikTok, The UK YouTuber stood surrounded by fans in a packed super-market. One fan, raised his bracelet-covered hand then approached the neon-yellow shirted YouTuber. In the fans raised hand was a measuring tape. The fan extended the measuring tape whilst calling the YouTuber’s name. “Hey JJ,” the fan said whilst sizing KSI with it. “Ayo, chill fam” The YouTuber responded in a fit of laughter while pushing the measuring tape away. “Were about to find out if your 6 foot or not” the fan joked, as KSI allowed himself to be measured. “Looks like 5’11”, joked the fan. 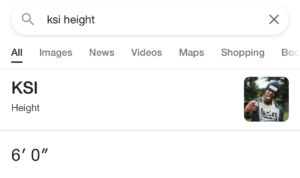 A Google search for KSI’s height.

So what’s with all the short jokes? Well, KSI’s fans have always made fun of the artists lacking stature. In his community, it has been a running joke, as google reports the UK artists as being 6 feet tall. In his most recent video titled “I HAVE COVID”, KSI even reacted to some “5’11” jokes. This caused his community to be even more vocal with these jokes. So it made sense with an in-person event that his fans would fact-check the artist

Looking for more KSI news, click here to read all the info on his new sports drink company.