Let’s face it, KSI has had one crazy past year. On top of being involved with multiple YouTube channels and launching a new sports drink company named ‘Prime’, the UK-raised influencer is still managing to find time to make music. In recent, KSI’s music career has been extremely fruitful. And according to new information, it seems like he’s laying the groundwork to continue his success. 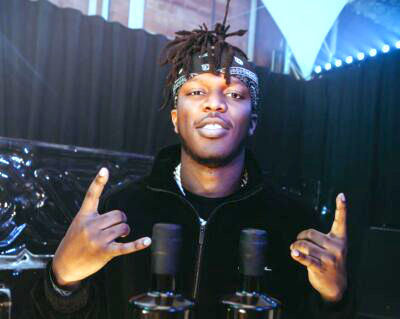 A photo of KSI promoting the Sidemen branded vodka named ‘XIX’ that launched earlier this year.

KSI has had a busy year so far, which had some fans worried about his music career. At first, fans were actually a bit let down by the artist. Many took his recent Sports Drink announcement as a bad sign, as they believed this would be another distraction for the artist. However, KSI set the record straight in the most recent episode of the Impaulsive podcast where he announced that he has an album on the way. “I’m working on my next album,” he said while explaining how busy he has been.

That’s not all. Fans got even more reassurance after seeing recent photos of KSI back in the recording studio. Especially after seeing the artist with some pretty big names. KSI was seen in pictures with a multi-platinum producer and Internet Money member, Cxdy. Additionally, KSI was also spotted in the studio together with both Diego Ave, a grammy award winner, and Ivory Scott, a songwriter for artists like Ed Sheeran and Lil Baby. Following these two teases, many fans of the rising artist changed their disappointment to eagerness.

Over the past two years, KSI has seen great success in the industry. First, we saw him obtain a platinum single, then we saw him obtain 2 gold albums. On top of this, we also saw him reach high, raising the bar for all influencers. The first time we saw him raise the bar was with both of his previous two albums. Both albums peaked in the #1 and #2 spots on the UK’s Billboard albums chart. This is a massive feat for regular industry-backed artists. So for the former FIFA video-gaming YouTuber to have had such success, it shows KSI’s drive for growth. This year we also saw him collaborate with his former opponent Logan Paul to launch a worldwide sports drink company named ‘Prime’. Time and time again KSI has demonstrated growth in his career and as a person. The artist is now at a point where his future is looking brighter than ever.