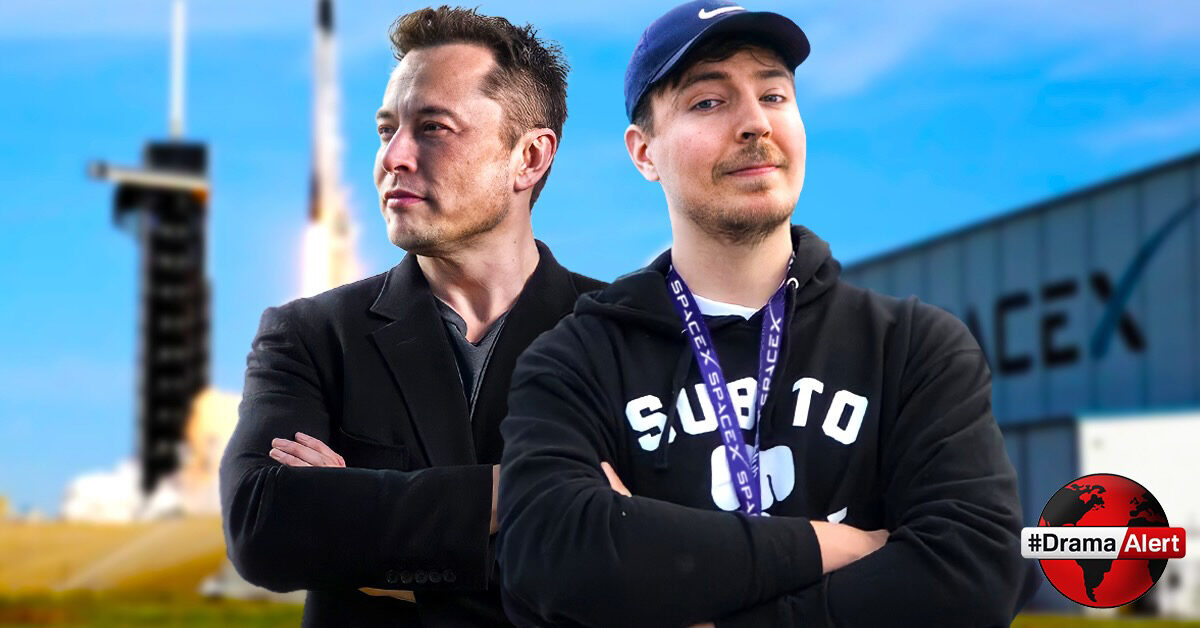 It’s no secret that the YouTuber MrBeast has cracked the formula for virality. Last November, the content creator took the world by storm with his viral video recreating Netflix’s hit series ‘Squid Game’, amassing over 228 million views in the process. Since then, the world has been wondering how the content creator will top his recreation. Well, we may have just figured out MrBeast’s plan – and it may just involve SpaceX. Here is one theory with supportive evidence for MrBeast’s next big video.

For what has seemed like the better half of a decade, MrBeast has always been interested in the idea of collaborating with SpaceX’s founder Elon Musk. MrBeast might have finally secured the chance. Back at the beginning of 2021, MrBeast ran a promotion centered around the moon. On Twitter, Beast offered his fans the opportunity to send any picture they wanted to the moon for $10. This promotion was done in collaboration with a company titled Lunar Capsule (https://lunarcapsule.com/). Essentially, the goal of this project was to serve as a time capsule for humanity. On Lunar Capulse’s website, it advertised the possibility to “Immortalize your name and favorite photos and videos on the Moon”, which would be a part of the “first commercial lunar landing mission.” According to Lunar Capsule’s website, the launch of the lunar landing mission was scheduled for July 2021; however, it appears to have been delayed as there have not been any updates on the project. As a part of the purchase, Lunar Capsule purchasers are supposed to receive “quarterly mission updates”, “updates as the mission occurs, including launch”, “images of the [spacecraft] on the moon”, and more.

A screenshot of the Lunar Capsule FAQ page, which lists everything a customer receives with a purchase.

Putting Crypto On The Moon – The Lunar Capsule Promotional Material:

Note from editor: since the publication of this article, Mr. Beast has privated the promotional video. The above video is a re-upload.

At the time, fans of Beast did not think much of it; however, new evidence seems to suggest that Lunar Capsule is associated with SpaceX. Firstly, on Lunar Capsule’s website, they mention the following: “We use a commercial lunar delivery service which officially partners with NASA.”

This raises the question of who is behind this commercial lunar delivery service. Back in 2020, NASA originally had three commercial teams working on its human landing system program – SpaceX, Dynetics, and Blue Origin. However, due to budget cuts NASA ultimately went with just one of the companies which was SpaceX.

Additionally, back on April 16th, 2021, when NASA announced the $2.89 Billion dollar contract with SpaceX, NASA issued the following statement: “the agency has selected SpaceX to continue development of the first commercial human lander that will safely carry the next two American astronauts to the lunar surface”

In March of 2022, a new congressional spending bill was proposed which would allow the full funding of NASA’s moon lander program. Interestingly, a day later was when MrBeast took to Twitter to tease his “best video ever”.

Also give me a few months and I’m going to drop what will probably be our best video ever. I have an idea that is bigger then our squid game video and so interesting/insane that I doubt it will ever be topped (Assuming we can pull it off haha) 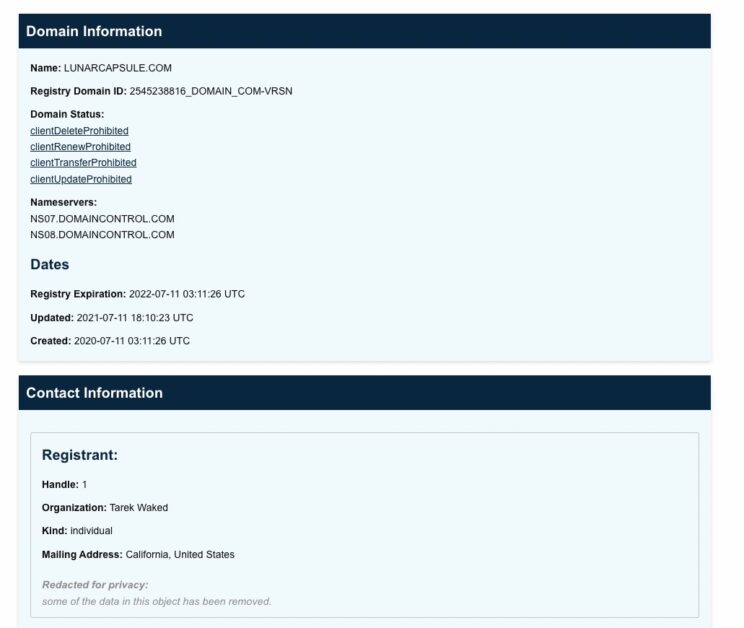 A strange connection between Lunar Capsule and SpaceX can be found by digging into the registration of Lunar Capsule’s website domain. According to ICANN’s domain lookup tool, the domain is registered to “Tarek Waked”.

So who is he? According to both a Twitter account and LinkedIn accounts under the same name, Tarek Waked claims to be a founding partner of ‘Type One Ventures’ and an investor in SpaceX. The official Lunar Capsule Instagram account also follows someone with the same name. Additionally, to make things stranger, Elon Musk himself has also interacted with Tarek Waked on Twitter. 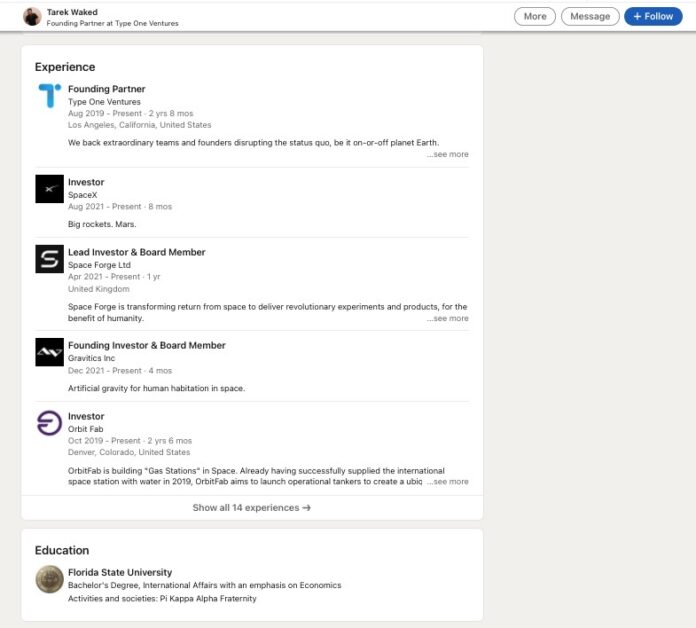 A screenshot of the LinkedIn account under the name Tarek Waked

On Twitter, the account under the name @TarekWaked (The same account that Elon Musk interacted with) tweeted a reaction to the announcement of Lunar Capsule. In this Twitter thread, he shared: “Now we can make a meeting between Elon musk and Jimmy happen!” 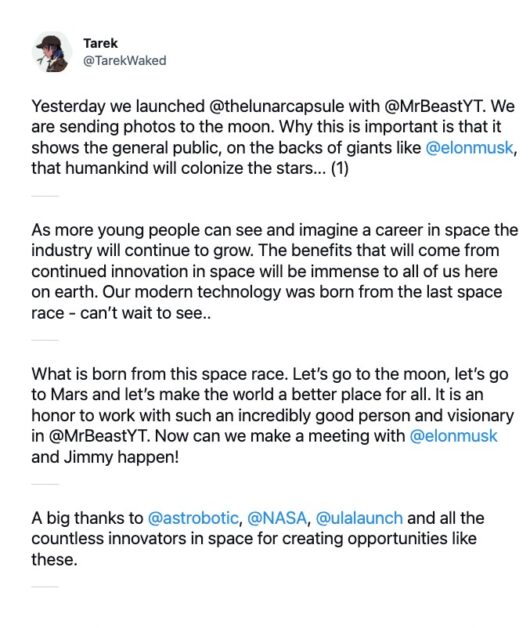 Due to the lack of updates from Lunar Capsule, fans of Beast took to Reddit to discuss the rocket launch. Many fans believe the hard drive containing the photographs will be alongside the Peregrine lander – however, DramaAlert could not find a solid lead to suggest this. The peregrine lander was originally supposed to launch back in 2021, however, was delayed until 2022 because the launch provider, SpaceX, delayed the launch citing “unique mission requirements”, and would not disclose any more details. Additionally, according to NASA, the launch site for the Peregrine lander will be in Cape Canaveral Florida – the same place where Lunar Capsule was mentioned.

If fans’ beliefs are true, this might explain why we have yet to hear an update from the Lunar Capsule team regarding its status, as the launch could have been delayed.

Elon Musk’s History Trying To Get DogeCoin On The Moon:

Like MrBeast, Elon Musk also has a history of suggesting he might get cryptocurrencies to the literal moon. Back on April 1st, 2021, Elon tweeted that he was going to put DogeCoin on the moon. (Yes, on April fools day.) A month later, he tweeted again on May 9th, 2021, saying SpaceX will have to send its Doge-1 satellite to the moon in 2022 — suggesting the cryptocurrency will be onboard.  Additionally, on December 28, 2021, while on the Lex Fridman podcast, Elon Musk elaborated about SpaceX’s potential plan to put dogecoin on the literal moon and other planets.

SpaceX launching satellite Doge-1 to the moon next year

As of the writing of this theory, Lunar Capsule has yet to update the purchasers on the current status of the project. DramaAlert can confirm that no notification was sent via email to customers, nor does there seem to be any updates listed on their site or social media accounts. If any information changes, the DramaAlert news team will update this article. However, given the current evidence, we may possibly see Elon Musk and MrBeast collaborate, possibly over getting Crypto to the moon.