Jake Paul to Dana White: “You met your maker”

“You met your maker”

Jake Paul has done it again. The undefeated 5-0 influencer boxer has managed to set the fight world ablaze. Recently, Jake Paul and UFC’s president Dana White have been proposing challenges back in forth to each other, but Jake Paul might have just taken it to the next level. Last night, UFC’s president took to Instagram and Twitter to share a video message directed at Jake Paul. In this video, Dana White claims that Jake Paul never responded to Dana White’s original drug testing challenge. Dana White also talks about how Jake Paul’s manager was a former UFC accountant — calls him a scumbag in the process:

.@jakepaul you never responded to the challenge pic.twitter.com/1uzI9mur1T

However, Dana White’s statement is not entirely true. As reported on by DramaAlert.com, Jake Paul did formulate somewhat of a response, by proposing his own challenge to UFC’s president.  Jake Paul, in response to Dana White’s latest video, issued his own video response.

In this dramatic video response, Jake Paul publically addresses Dana White, completely roasting and lambasting the UFC president in the process. Jake Paul in his response hits all the major points and addresses the criticism that the UFC’s president directed at him. Firstly, Jake Paul hilariously roasted Dana White’s appearance. Secondly, the youtube boxer poked fun at UFC superstar Jorge Masvidal’s low social media stats by stating that his mother Pam Stepnick gets more likes than him. Thirdly, Jake Paul defends his manager. He mentions that his manager was the chief financial officer of the UFC and that he helped sell the UFC for billions of dollars.

“I said I would fight MMA. I said that I would retire from boxing and you avoid all of that shit” … “it shows that you are in a corner. A dog in a corner, trying to fight to save his whole company” Jake paul said.

“You met your maker” – Jake Paul, in his video to Dana White

In response to Dana White suggesting Jake Paul does steroids, Paul updated his Instagram bio, showing that he’s ready to be drug tested.

KSI reacted to Dana White via Instagram. Says Dana White responded to his challenge first. Implying that they should do Dana White’s drug-testing challenge before they do Jake proposed challenge.

Nelk chimed in on the drug testing challenges: 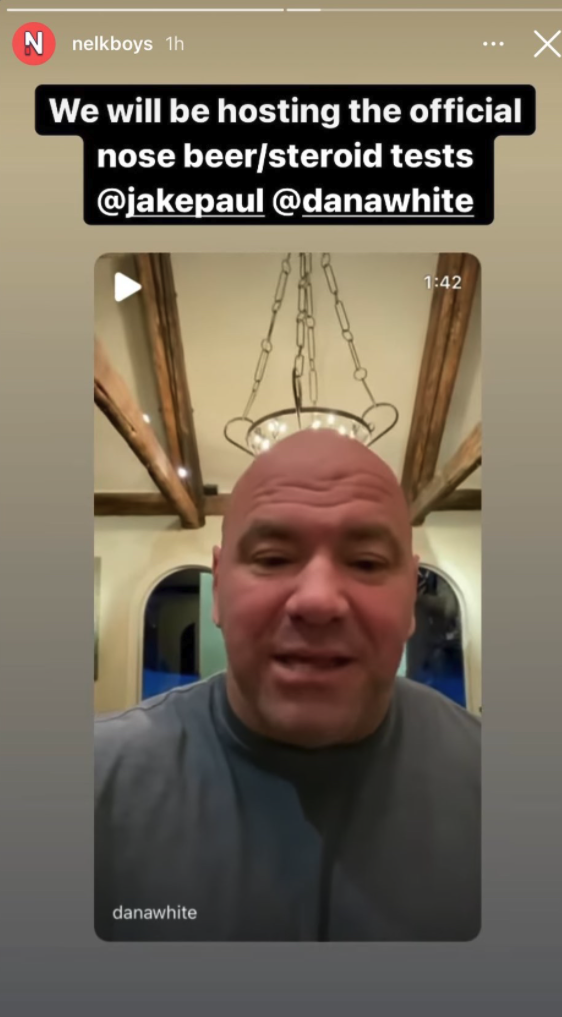 Prior to Jake’s response to Dana white, Nelk reacted via Instagram, suggesting that they should host the drug testing for Dana’s challenge.

To read more about Jake Paul and Dana White’s ongoing feud, click any of the following: