A new NFT project dubbed ‘EtikaPunks’  is using the late YouTuber Etika’s likeness without Etika’s family’s approval. That’s not cool and something needs to be done about it. To the dismay of Etika’s fans, the project was first spotted via Twitter on Jan 4th, 2022.  Its design mirrors that of a popular NFT project named CryptoPunks, but unlike CryptoPunks, this new project has hideous intentions.  The project’s primary promotional material features a pixelated rendition of the late YouTuber, with the background being a bridge in order to mock the location where Etika, unfortunately, took his own life.

What y'all have been waiting for… ETIKAPUNK NFTs! 😍

Commemorate the life of Etika who sadly ended his own life with these one-of-a-kind NFTs made by fellow fans of his!https://t.co/slFLMQnTjA (ONLY 7 DAYS 🔥)#NFTs pic.twitter.com/b0H2oqFbO4

If it’s not painfully obvious, Etika’s family and close friends had zero involvement nor did they give approval on this horrific project. In fact, Etika’s former girlfriend Alice spoke up about the situation in a now-deleted tweet. 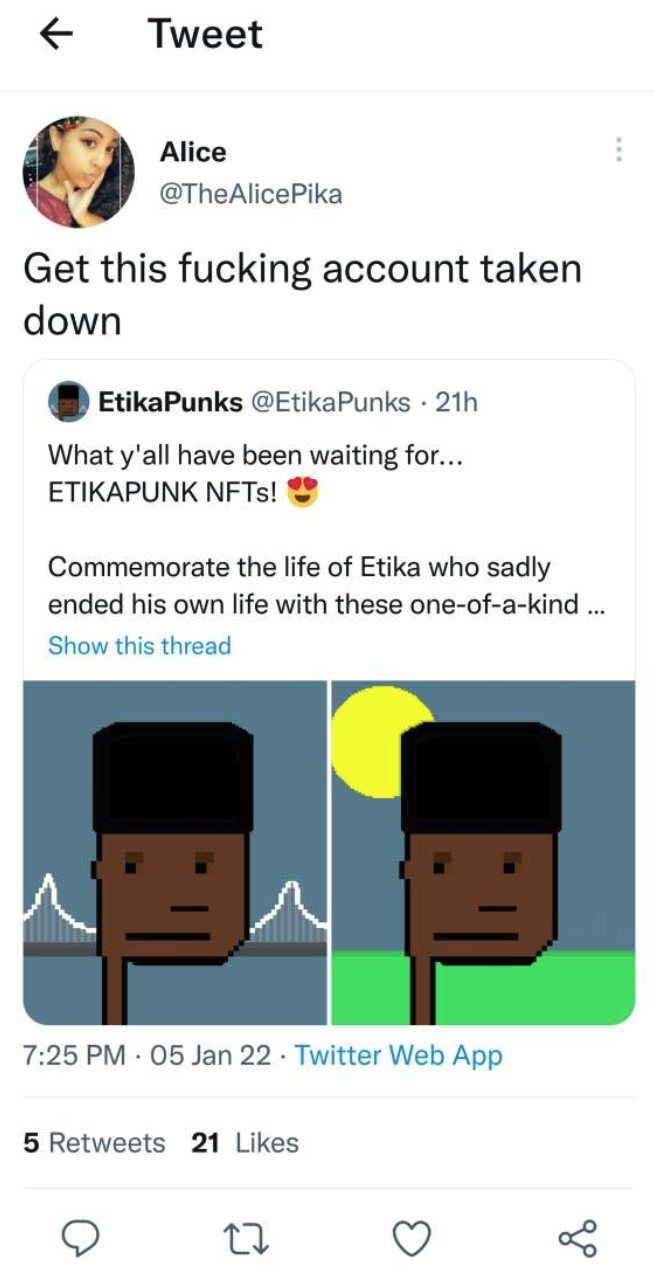 Frustrated with the situation, Alice also shared the following tweet.

Twitter users are seriously pissed off with this situation, as they should be. Some Twitter users are trying to take action into their own hands by getting the project shut down. One way users are trying to get the project shut down is by informing Nintendo that their game controller, dubbed ‘the joycon’, is being featured in this project. Nintendo has a history of strongly defending its intellectual properties, and so some fans are hoping they’ll get this shut down.

Hey @NintendoAmerica are these your controllers on this guys head? I’d appreciate your power

As of now, there are no updates on this story.