MamaMax and Tipster have had a public back-and-forward on Twitter regarding DMs between the two and a foiled interview attempt. 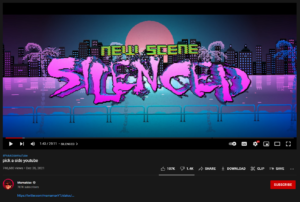 A screenshot of MamaMax’s recent video.

MamaMax, who recently released ‘pick a side youtube‘, has created a social media movement called #PickASideYouTube. The hashtag hit trending on Twitter and has led to notable figures such as Chris Hansen to follow them. Tipster was scheduled to interview MamaMax, but this was unfortunately delayed due to Tipster becoming ill. (Note: The original tweet has been deleted but quoted.)

However, Tipster would take this planned interview off the table hours later in a follow-up tweet.

MamaMax would reply to Tipster with the following:

I was just wondering what your intentions were 😓 pic.twitter.com/26YVzYJYPZ

In the screenshot provided by MamaMax, a conversation with Tipster is exposed.

MamaMax: “It’s enough for our mutuals to think you’re trying to ruin my reputation so that’s why I wanted to bring it up.”

Tipster: “You’re accusing me of being dishonest when nothing I’ve said wasn’t based on what you told me. Fuck your mutual. Idgaf about your mutuals. This is a conversation between you and me.”

MamaMax: “I mean you’ve accused me of being dishonest when everyone in the group chats knew exactly what I was asking for, save for like 1 or 2 people who did not speak up to me, but did to you.”

Tipster: Because I believe you are being dishonest. If that hurts your feelings, then I’m sorry. But that’s how I feel about this.”

MamaMax: “You believe I am being dishonest when 1 or 2 out of 30 people blindly accepted a collaboration?”

Tipster: “You know what? Screw the interview. I’m not interested. And don’t worry. I’m not covering this story on my show. By the time I recover from this sickness it will be old news anyway. Have a nice day.”

Shortly after, more DMs would be leaked in a later Tipster tweet: 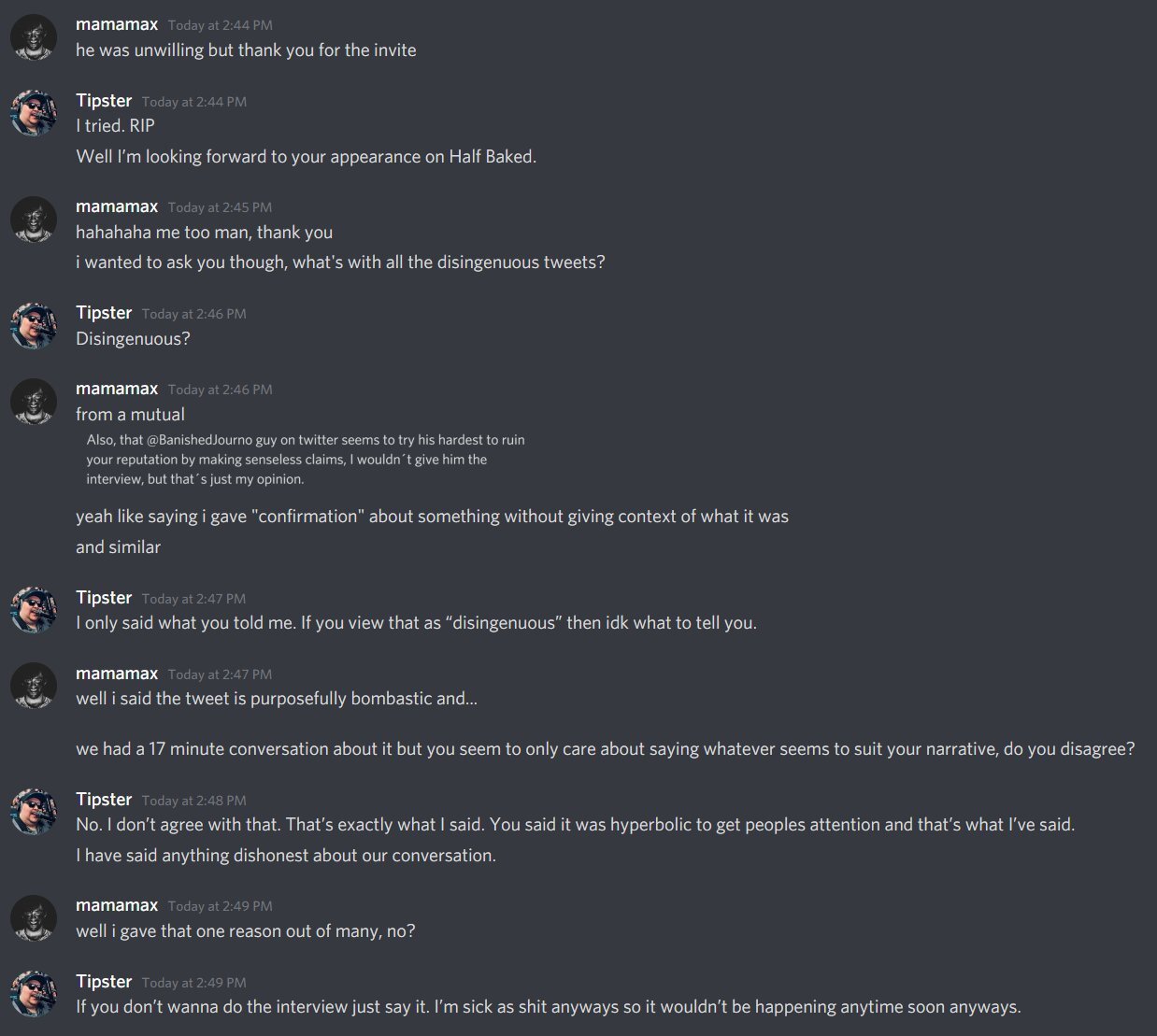 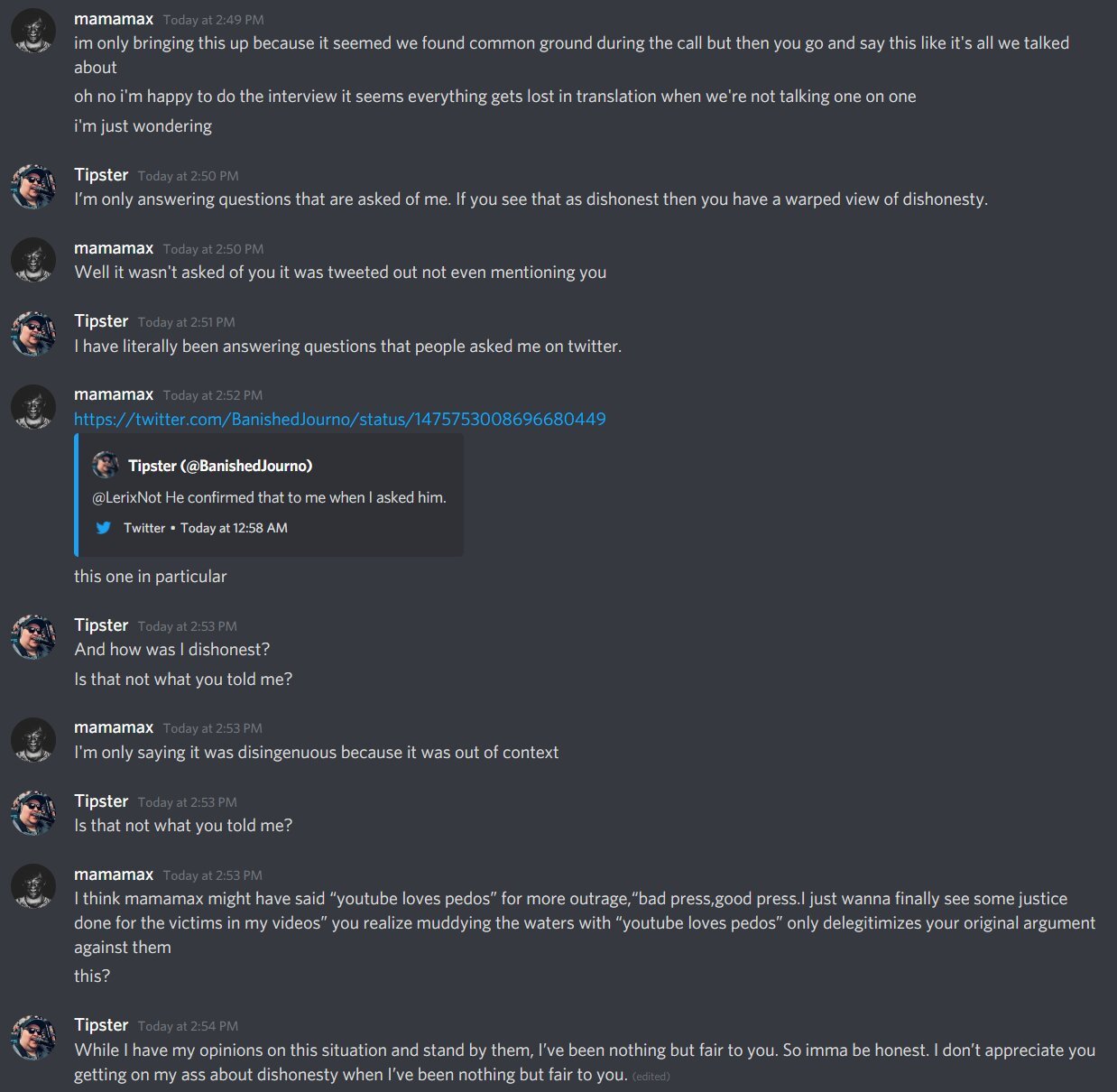 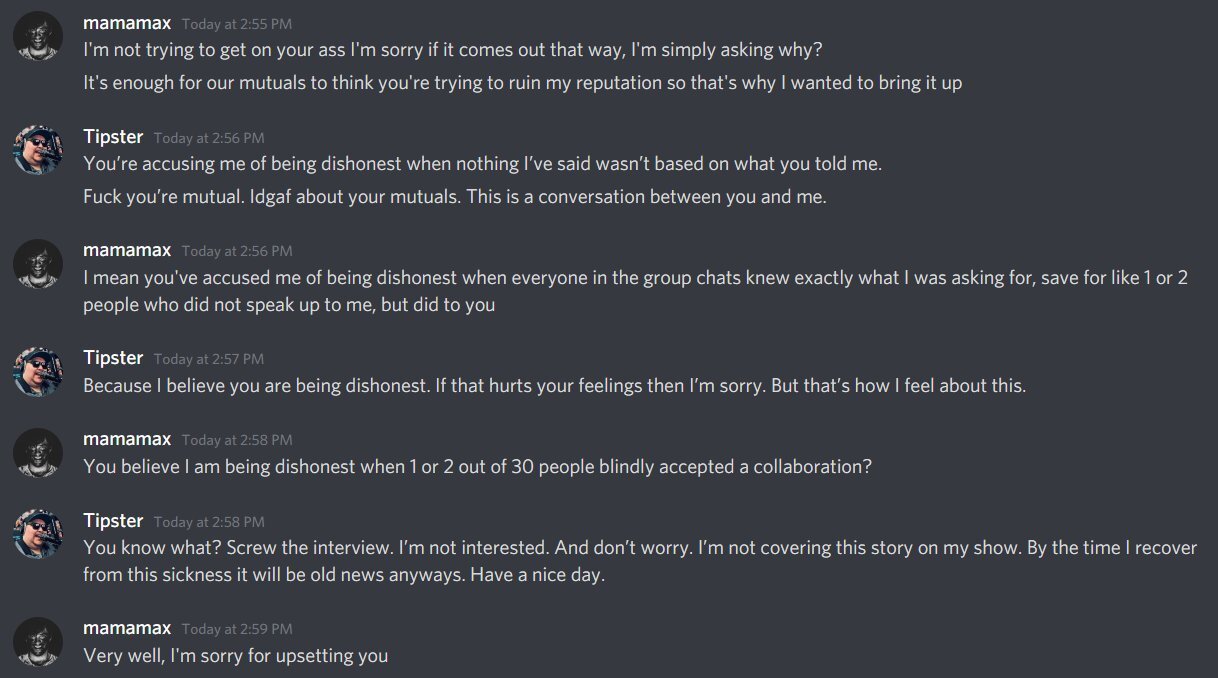 While Tipster has clearly indicated that he refuses to interview MamaMax, it appears that MamaMax is still interested.

Fellow YouTuber AugieRFC (@AugieRFC) responded to Tipster’s claims that his reactions are treated differently by the community than other creators.

Tipster, no one is mad at you because you told a bigger YouTuber to fuck off. People are just confused why you are overreacting to him confronting you. I get not liking his questions but what did you expect? You called him dishonest, obviously he's going to press you on that

Tipster responded with this:

It appears that any chance of MamaMax appearing on Tipster’s show for an interview is now gone. MamaMax will be appearing tonight on the Half Baked Podcast with Nicholas DeOrio, Turkey Tom and Lord Vega.

We will be having MamaMax on the half baked podcast tonight to answer questions about his recent video #PickaSideYouTube, if you have any questions drop them here and I will pick the best/most interesting ones pic.twitter.com/6hmSzAvp8B

For more updates on the latest news around the Internet, click here.

Update #1: It appears that Tipster has deactivated his Twitter account after the incident, reportedly to focus on his health. I want to extend my best wishes to Tipster and hope to see him healthy again soon!